Background: In a race to win the ‘most prestigious title’ of Vice President, Senior Vice president or even the CEO of a company, many of us push ourselves to work extra hours in order to learn all and be a master in the given domain or field. What we fail to realise is that in the present times, just mastering skills is not enough. You need to think ahead of your time and out of the box in order to remain relevant. Rajeev Peshawaria in his previous article explained five critical questions leading to leadership success and life happiness. This article explores the career value curves in a person’s life.

Armed with a dual degree in Law and Finance, Jason joined the legal department of a corporate bank as a legal assistant. Thanks to his strong work ethic and self-discipline, he had done reasonably well throughout school and college. His parents had taught him the value of sincere hard work, and over the years this had become his core strength. At work, he applied the same strength and did the best possible job on all projects or tasks assigned to him. Soon he earned the trust and confidence of his superiors, and became known as one of the most reliable and hard-working legal assistants.

Over time, he found himself being staffed on more complex transactions that routinely stretched him far beyond his comfort zone. However, each time, he would work long extra hours, research case precedents and produce excellent results. His consistent “above and beyond” effort earned him a promotion to manager before any of his peers. Since he was always helpful to others and forever humble, no one resented his early success. Most people were willing to work with him, and it seemed he knew how to get the best out of his subordinates and peers.

As the years rolled by, he developed deeper expertise in corporate finance law. There was hardly any transaction or complex deal that he could not handle. He soon became the go-to person for anyone that had questions or needed help with almost anything to do with corporate finance law. His technical expertise along with his overall social skills resulted in him becoming the second-in-command in the legal department of about 80 people. Everyone believed that when the current vice president of Legal would retire or move, he would be the next in line for the top job. The VP had himself commented several times that Jason was his most dependable resource.

The day finally arrived when the VP did retire, and Jason fully expected to take charge. After all, he had worked hard all these years to earn the spot, and hardly anyone in the department disagreed with that perception. During the VP’s annual vacations he had acted as interim head on several occasions and had made sure not to drop the ball during the boss’ absence even once. To his surprise however, the selection committee told Jason that he would not get the job. When he asked why, he was told this:

“You have the technical skills, but you are not strategic enough for the top job.”

As expected, Jason was devastated and could not understand what he could have done differently over the years. He thought about his situation and concluded that he was being discriminated against. He pinned it down to one influential person in the selection committee who was against him because he wanted his protégé to get the job. Jason thought it was completely unfair because the person they wanted to appoint had left the legal department a few years ago while he was the one who had worked diligently all along to keep up the department’s reputation of being a reliable business partner.

Jason saw the committee’s decision as humiliating. Did he not deserve better than this after all those years of hard work, he asked himself? He wondered what his colleagues and subordinates must be thinking about him, and what the ‘water cooler gossip’ about him would be. He was convinced that the entire department was looking down upon him. Unable to bear the embarrassment, he began to keep his office door closed, and cut down staff meetings to a minimum. After all, he needed time to think, and there was no point talking to people. If they asked him what was going on, he wouldn’t know what to say.

Jason gave himself a week before acting. After careful consideration he decided to take up the issue with the bank’s ombudsperson. Having spoken with a few of his close friends he was convinced that the ombudsperson would see the unfairness of the committee’s decision and overturn it. He also consulted the CEO’s chief of staff, who assured him that his concerns would be looked into. Having had what he thought were good meetings with the chief of staff and the ombudsperson, he felt a lot better and hoped that justice would be done soon and that he would be appointed to the position that was rightfully his.

Now pause again and think about the following two questions:

2. What might be the likely impact of such actions on his career?

Chances are, you can easily see what Jason could have done differently both leading up to his current situation, and while responding to it. It is always easy to see it when you are looking at someone else’s behaviour. The hard part is to recognise yourself when you fall into what we call a reactive victim trap. Jason is by all means a very bright, energetic, ambitious, hard-working and sensible person. The point is, this situation can happen to the best of us, and most fall into the trap without even realising it. So how can we avoid such a mid-career crisis? First, by recognising what causes it and then by intentionally sculpting one’s life and career. Sounds simple, but it needs a great deal of self-awareness, proactivity and discipline.

In a typical career, one learns the established conventions of their profession in their 20s, then masters convention in their 30s. By about 38-40 one develops the reputation of a solid expert and very dependable hand in their chosen domain. By their mid-40s, they know everything there is to know about their domain, and are able to respond effectively to almost everything that comes up. By this stage they have become perfect problem solvers. Now, it is only a matter of time before they will get the top job in their function, they think. In many cases however, they get bad news like Jason. Why? Because stopping at mastering convention and becoming a dependable problem solver (and process preserver) is no longer enough in today’s complex, inter connected VUCA world. At 45 or 50, one needs to level up one’s career value creation from solid to super. Continuing to rely on mastered conventions ultimately leads to diminishing value creation, and therefore a stalling of career growth as shown in figure 1 below. Furthermore, reacting like a victim like Jason did can be a fatal blow to an already grim situation. 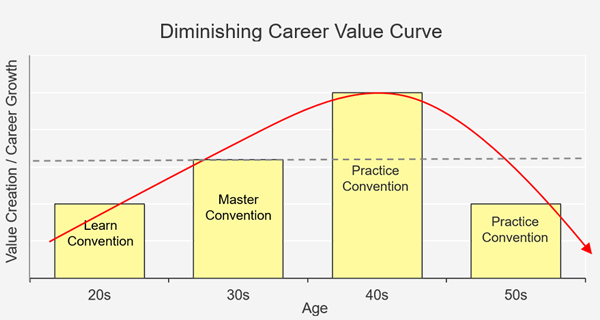 As noted previously, knowledge and experience is not as much at a premium today as it used to be. In the old days, the number of years one had put in a selected domain were considered invaluable experience because one could be counted upon to know what to do based on knowledge gained from repeated past successes, and some failures. In other words, the domain expert was a guru, and therefore a safe bet to lead a function. Today, a young up and coming executive can look up knowledge easily and for free, so repeated past experience has lost some of its sheen. To remain employable and continue to thrive one must question status quo and routinely create new standards and norms. To paraphrase from Peter Thiel’s bestselling title, one must proactively develop the “Zero to One” habit. Instead of simply learning and adopting best practices, which Thiel calls going from “One to N,” one must regularly create new value by doing what has never been done before, hence going from “Zero to One.”

What this means is constantly keeping an eye on one’s career value creation. This can be achieved by anticipating new internal or external customer needs, and creating solutions that don’t yet exist. It is the art of struggling to find out how unmet needs can be satisfied, and new needs can be created to make life easier for your customers. So instead of stopping at mastering and perfectly practicing convention, one must challenge convention, develop new hypotheses, try new solutions, be prepared to fail a few times, and ultimately succeed in creating a new normal. By doing this regularly, one develops a reputation of being an innovator and a strategic thought leader that can be entrusted with the task of growing a commercial, government or non-profit endeavour. Key here is the willingness to take risk and be vulnerable. Most innovative leaders don’t have all the answers before they begin working on a new idea. They develop a hypothesis, take the risk of getting started and find the way forward by trial and error and by collaborating with as many people as they can. They are always in sensing mode – constantly on the lookout for opportunities to challenge status quo and create a better future. The result is an upward sloping career value curve as shown in Figure 2. It is true that some people in Jason’s shoes do succeed because somewhere along the way they recognise the need to evolve. The opportunity can come in the shape of a good manager who personally mentors them, or because an early career crisis or situation forces them to innovate. But why leave this to chance? There is no point in ending up with the feeling of “I did not succeed because I never had the opportunity to” Instead, by developing the “Zero to One” habit early on in one’s career, one can learn how to create one’s own opportunities.

Getting started
At the end of the day, success boils down to routinely asking oneself the following questions:

Now take a final pause, and think about the above questions in the context of your own life, career and work. Good luck!

Interested in reading more articles by the same author? Check out some of them here:

The truth about trust

Is the lack of privacy making us more honest?

No such thing as bad leadership 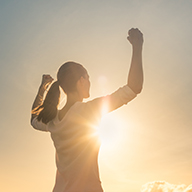 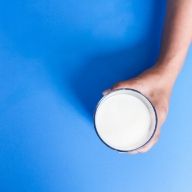 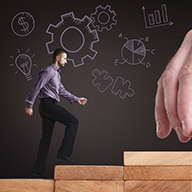